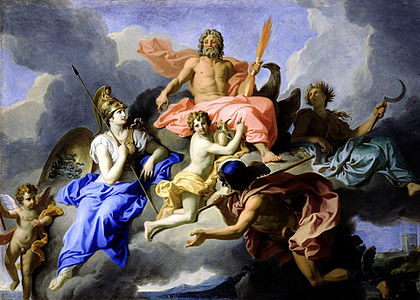 Gambling is almost as old as mankind. People have always loved to gamble since it triggers adrenaline and excitement, plus, there is the possibility of earning extra cash without too much work.

We’ll realize that the ancient cultures often used dice games or threw coins to resolve their disputes, earn their freedom, and even regain their possessions. It wasn’t easy to put their luck on a stake, so people turned to certain gods and ask or pray for help.

Some of the most famous gambling gods and gods/goddesses of luck and fortune are:

Hermes – The Greek God of Gambling

Hermes is the Greek God of gambling. Hermes also represents as a charlatan, able to outmaneuver the other gods for the good of humankind or for his own reasons.

Thoth is mostly known for being the God of wisdom, writing, science, magic, art, and judgment. Thoth was the one who gambled with the Moon for 5 days (or 1/72nd of the Moon’s light) and won. So, there is no wonder that the ancient Egyptians pray to Thoth prior to placing bets.

Mercury – The Roman God of Luck and Financial Gain

The Roman god of luck and financial gain. Son of Jupiter, Mercury is the god of merchants, travelers, transporters of goods, as well as the protector of thieves and frauds.

Dažbog – The Slavic God of Fortune and Wealth

According to Slavic mythology – Dazbog was a god of the Sun, flame and rain. He knows as a “giving-god”. If translated literally, the most adequate interpretation of Dažbog would be “dispenser of fortune”.

Gefion – The Norse Goddess of Luck and Prosperity

The Norse goddess of unmarried women – Gefion. According to Norse mythology, Gefion is a goddess connected to the Danish island of Zealand and is also known for investing, intelligence, and virginity.

Gad – The Pan-Semitic God of Fortune

Usually portrayed as a male but sometimes referred to as a female, Gad was the pan-Semic god of fortune. The short quality of personal name Gad (meaning fortune and happiness) provides a few hints about his character and identity.

Born as a young boy instead of an infant and living during the Shung Dynasty, the Chinese god of gambling, Nezha won and killed his enemy but committed suicide to protect his family and the people. The mortals on the Earth began to worship him since the legend says people prayed to him to help them with lotteries and gambling.

As per Japanese mythology, the Seven Lucky Gods (Seven Gods of Fortune) are said to bring good luck and are often symbolized in netsuke, paintings, and sculptures. People worshiped this group of gods because of the importance of the number seven in Japan, a well-known signifier of good luck.

Macuilxochitl – The Aztec God of Gambling

Macuilxochitl (Xochipilli, or ‘flower prince’) who supervises over different kinds of pleasures in life including games and gambling. He is one of five gods who represent excess and extravagance.

Nohoipili – The Gambling God of Navajo

Known as the Great Gambler, Nohoilpi is the Navajo god of gambling who simply enjoyed playing games. He would challenge people to play knowing he would win. At some point, Nohoipili had won houses with families living in them and enslaved these poor people.

Lakshmi – The Hindu Goddess of Wealth and Fortune

The Hindu Goddess of wealth and prosperity – Lakshmi and it is her name that someone calls when they need some gambling luck on their side. The 5-day festival of lights Diwali, Divali, Deepavali is being held to celebrate many people gather to gamble. So, it’s no wonder that worshippers approach Lakshmi for any kind of good fortune when they need it.

Nortia was famous for having an influence on fate, destiny, chance, and time.

Tyche and Fortuna – Greek and Roman Goddesses of Luck and Fortune

Tyche was the tutelary deity who governed wealth and fortune. She was so adored that the Greek cities even established their own iconic versions of the original Tyche called Tychai.

The patron saint Gaetano Dei Conti di Thiene, also known as St. Cajetan, was a well-known protector of gamblers who also helped the unemployed, gamers, document controllers. He also knew something of poverty and pestilence.